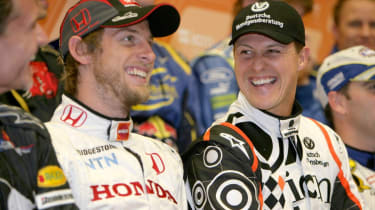 Michael Schumacher’s rumoured move to the new Mercedes grand prix team looks very much on. Word of the seven-times champion returning to Formula 1 has been building over recent weeks, seemingly spurred on by his failed attempt to return to the sport to fill Felipe Massa’s seat earlier in 2009. And now it’s been pretty much confirmed – Ferrari president Luca di Montezemolo has revealed that Schumacher has told him he is planning a comeback to F1 with Mercedes.  This is Luca’s slightly obscure statement – ‘A guy called Michael Schumacher told us at Monza (in September) he would renew his (Ferrari consultancy) contract, and it looked like his career would finish with Ferrari. ‘But then there's another one who looks like him, 40, 41 yrs old, German, same name and decided to do a new career. Everybody in life can do what they prefer, and I understand that there is somebody at 41 years who wants to try again. ‘So I think it's possible this twin, another Michael Schumacher, same age, same capability, some determination and spirit, will drive for Mercedes next year.’ Sounds like he ain’t exactly over the moon about Schuey’s switch. He did say, though, that a return by the sport’s highest achiever would be ‘good for F1’.  Quite what Michael has to prove is a mystery, but Schuey v Hamilton should be quite an intriguing little battle… Follow evo on Twitter or our Facebook page for car and F1 news