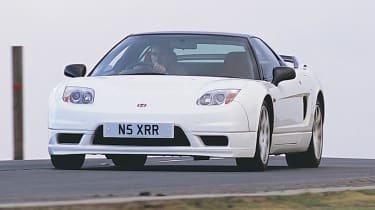 What’s the best car of the last ten years? It’s a particularly apt question as the first decade of the 21st century draws to a close. So we’re asking it, or more specifically, asking YOU it. Every weekday we’re looking at an evo Car of the Year contest from the Noughties, detailing the top five and throwing the vote at our lovely readers to pick the winner. The ultimate ten will then fight it out in the New Year for evo Car of the Decade. Click for winners so far and eCotd roundup Today’s the turn of 2002. Peruse the performance cars below and get voting this way. The link takes you to the community, where if you scroll down to the bottom you’ll find the voting panel. Head to the Forum if you want to do more than click… Honda NSX-R (click the car names for content)Car of the Year 2002 saw an unofficial import take the honours. Should that have been the case? Well, in the words of our esteemed testers, the purest drivers’ car won. David Vivian – ‘the NSX started life as the most contrived, compromised supercar – for all the right reasons – and it’s been turned into the hardest, purest, most involving there is.’ John Hayman dubbed it intense but utterly superb – ‘anyone still not sure what we’re talking about when we bang on about evoness should just drive this car.’ Does that make it a contender for the best car this decade? Porsche 996 C4SWhile on paper the Carrera 4S may sound like one of the myriad of box-ticking 911 derivatives, it proved itself to be more than that at eCoty 2002. Our Roger Green said at the time it was second only in the rear-engined Porsche range to the mighty GT3. John Simister – ‘I got into this car and everything, just everything, felt right and sounded right for my notion of what the almost-perfect road machine could ever be’. Exceedingly high praise… Ferrari 575M FioranoFerrari’s front-engined V12 coupe was already pretty high in our estimations (Harry Metcalfe owned a 550 Maranello for some time, remember), so some sharpened suspension and the resulting improvement to A- and B-road ability was never going to do our feelings any harm at all. The car’s main bugbear barring it a top-two finish was its fitment with a paddle-shift ‘box rather than Ferrari’s classic open-gate manual. It was a sign of things to come, though. Mercedes SL55 AMG‘Like a Jaguar XKR on nitrous oxide’, said John Simister. ‘An American muscle car with a nicer interior and the ability to go round corners’, according to Brett Fraser. Yep, it’s the SL55, which was a bit of a revelation for fast Mercs by combining real ability with straightforward grunt. And the sound of a Spitfire coming from the exhaust, too. That the current and more potent SL63 AMG is held in less regard shows just how special this was back in 2002. Lotus Elise 111SOne of two Elise variants that will vie for the evo Car of the Decade prize, and with some honour to try and uphold now its rather close relation, the Vauxhall VX220, will be present in the final. Peter Tomalin’s words – ‘as road speeds get lower, a car that rewards at 60mph – and one that’s also great on trackdays – seems the smart solution’. As speed cameras get cleverer and low weight and emissions become the in-thing, the Elise starts to look like a pretty fitting Car of the Decade. So, they’re your contenders for 2002. Click here to vote for your favourite and use the eCotd Forum thread to air your opinions or tell us about cars that should be here. And don’t forget to come back tomorrow for the best of 2003… Follow evo on Twitter or join our Facebook page