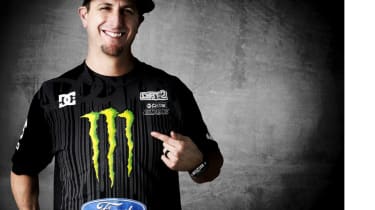 Youtube hero Ken Block is famed for his spectacular drifts, and now he’s drifting over to Ford to become the first American to compete in the WRC in 2010.  42-year-old Ken made his name online, spanking his Subaru Impreza WRX STi around disused airfields in his ‘Gymkhana’ series of videos. Now, though, he’s teamed up with Monster Energy and created Monster World Rally Team, ditching his Scooby for a Ford Focus RS.

See a video of Block in action here It’s not just any Focus RS however. This car is to be set up by M-Sport, who prepares all of Ford’s world rally entries. ‘I am stoked to be rallying in a Ford’, Block says. ‘They are an impressive force in the sport. From the days of the 1970s Escorts to the Group B RS200, to the modern-day Focus and now the Fiesta, Ford has an excellent history within rally. I couldn't be happier to be part of this amazing heritage. Not to mention my dad would be proud. He was a true Ford guy.’ The aim is to use his first season as a shakedown, before aiming for the top spot in 2011. ‘Racing in the World Rally Championship has always been a dream of mine but I'd still be dreaming if I promised podiums in the near future’, says Block. ‘I will be going head-to-head with the greatest drivers on the planet. And sure, I will be giving it my all but my main objective for 2010 is to develop into a competitive driver for 2011 and beyond.’ The 2010 World Rally season is shaping up to be an exciting one, with former F1 star Kimi Raikkonen also joining the competition against the likes of six-times world champion Sebastian Loeb and 2009’s second place finisher Mikko Hirvonen. You can read more about what’s happening with the World Rally Championship – and the motorsport that’s aiming to usurp it – in Issue 140 of evo, on sale now. See a video of Block trying out his Ford here. Follow evo on Twitter or on Facebook for latest car news and views