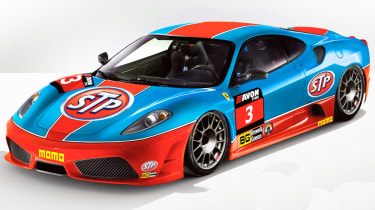 This week has seen not one, but four ultra-cool racing cars come to our attention. And it means we’re a bit stuck as to which one to have. So we’re going to have to get you to vote on it and pick for us. First up is the excellently liveried Ferrari F430 that’s set to compete in the British GT championship. Not only does it boast a screaming Italian V8 engine, but it’s adorned in the legendary colours of Richard Petty’s NASCAR racer. A fine thing. Being evo, a Porsche 911 will always float our boat. Especially in GT3 R racing form. Based on the roadgoing GT3 RS (video here), it boasts 480bhp and if you fancy racing one, stump up £250K and you can. An extra £17K will buy you another racing German supercar, the V10-engined Audi R8 LMS. It’s designed for customer motorsport teams and boasts much carbonfibre to keep its weight down, and a proper race-spec gearbox. Honda’s HSV-010 racer is the Honda NSX reborn, a contender to battle the Nissan GT-R in Japan’s Super GT championship, it packs a 3.4-litre V8 that sends 500bhp+ to the rear wheels. Sounds good too – listen and watch on video here. So what’s it to be? Head to the community, sign in and skidaddle to the bottom of the page to vote for your favourite. Results Monday. Comment in the Forum thread, too. Let us know your views on evo’s Twitter and Facebook pages