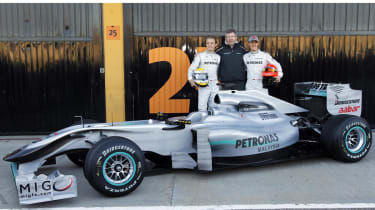 This week sees the 2010 Formula 1 season underway as official testing kicks off in Valencia.

And there's plenty of interest, with new driver line-ups at many teams and a number of new car reveals. The focus of much of the attention has been on Renault, with its striking new R30 car (a bit of old Jordan F1 in the design, anyone?) and the announcement of new driver Vitaly Petrov, the sport's first Russian driver.

Over at Mercedes, Michael Schumacher has been out testing - and returning quicker times than teammate Nico Rosberg. It's probably fair to say say the team's driver line-up will have at least as much impact as the design of its car.

Peruse our gallery of the latest Formula 1 machinery below, and head this way for evo's Formula 1 grid roundup.