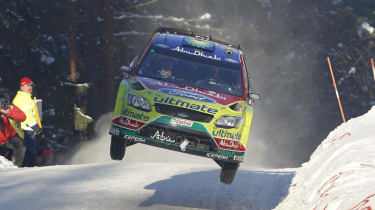 Mikko Hirvonen and co-driver Jarmo Lehtinen have continued their perfect start to 2010 by winning the first round of the World Rally Championship in Sweden. The Ford pair beat archrivals Sebastien Loeb and Daniel Elena by 42.3 seconds over the 21 snowy stages. In third was Hirvonen’s team mate, Jari-Matti Latvala, while fourth went to Loeb’s Citroen team mate Dani Sordo. Sweden also saw the WRC debut of 2007 F1 world champion Kimi Raikkonen. The Finn traded some respectable stage times with Matthew Wilson but also struggled with the snow banks getting stuck on more than one occasion and having to resort to a shovel to extract his Red Bull-backed Citroen C4.  Petter Solberg didn’t even reach the stages proper before spinning, embarrassingly losing 18sec on the opening super special. Another former champion, Marcus Gronholm, also struggled during the initial stages of the rally. However, he was back near the top of the time sheets once he’d changed the set up on his Focus, even setting the fastest time on stage 14. The snow and ice-covered roads in Sweden are notoriously unforgiving and it is imperative to try and keep to the ruts as even a wheel wide in the more powdery snow will send you crowd-pleasingly sideways but lose you huge amounts of time. The cars run on studded tyres and the conservation of these as the stages became rougher throughout the rally was a constant source of concern for all the drivers. Hirvonen, however, didn’t put a wheel wrong, with his team boss Malcolm Wilson praising Saturday as the Finn's ‘best ever single day performance’. A new points system this season means Hirvonen takes 25 points for his win, Loeb takes 18 for his second place and Latvala 15 for third. The points also now go all the way to 10th place, taken very impressively by popular local P-G Andersson in an S2000 Fiesta. After beating the IRC (Intercontinental Rally Challenge) boys in Monte Carlo Hirvonen has lots to smile about as he now leads two championships. All he will care about though is leading the WRC at the end of the season. Next up is the Corona Rally Mexico on 5-7th March, where eyes will be on a certain Ken Block making his WRC debut.