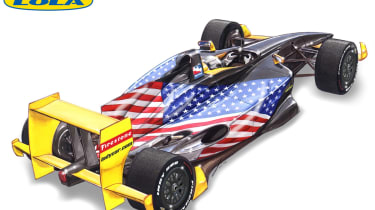 Indycar is something we rarely pay attention to on this side of the pond, but the 2012 proposals have been so radical that the series is now impossible to ignore. We’ve already seen the wild Delta Wing proposal, and now we have Lola’s thoughts of what the series should look like.  It’s a more conventional looking single-seater, but with aerodynamics that allow the cars to slipstream in each others wake. There is a twist – you can choose one of two body styles, neither of which would have an aerodynamic advantage over the other, guaranteeing a distinctive but varied one-make grid. Still won't be as distinctive as thirty-three Delta Wings travelling at 230mph though.

Do you disagree? Let us know right here