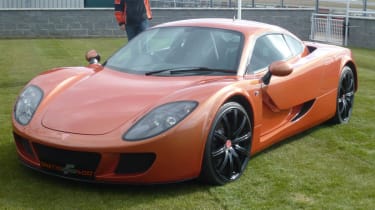 British sports car firm Ginetta has bought Farbio. It’s the second rebranding for the Porsche 911-rivaling sports coupe, which began life as a Farboud back in 2002. A buyout by Chris Marsh’s Farbio in 2005 saw the GTS (and its supercharged 350 variant) go on sale a couple of years ago, but a struggle to make the car’s manufacture affordable has seen the company join forces with Ginetta. The first produce of the link-up is this, the Ginetta F400. It’s simply a rebadged Farbio GTS400, the firm’s flagship 410bhp supercharged coupe. Hence Ginetta isn’t giving the car its usual G-number, using the F400 tag to acknowledge Farbio’s extensive development. ‘I have been continually impressed by Farbio’, said Ginetta chairman Lawrence Tomlinson. ‘Chris Marsh and his team have established a car which incorporates complex design with obvious beauty. ‘The acquisition by Ginetta will mean that we can further develop on the existing carbonfibre component facility which is housed at Bath whilst using Ginetta’s considerable motorsport credentials and inherently strong brand identity to propel a road car to international acclaim.’ For now, Ginetta’s plan is to launch the F400, with the 260bhp and 350bhp Farbios not currently expected to be rebadged. Most demand will come from outside the UK, with a target to sell around 50 cars a year and just a dozen of them to remain in Britain. It’ll remain a rare sight then, but with its price expected to top £90,000, that was always likely. The F400 joins a growing range of cars offered by Ginetta. The Autosport show in January saw the unveil of the Ginetta G40, a compact rear-drive sports car with a 1.8-litre 140bhp Ford Zetec engine and a neat 850kg chassis.  It’s set to star in the 2010 Ginetta Juniors championship for 14-17 year olds, and is now ready for race-goers to purchase (£24,950). The end of the year will see a road-going version on sale for just shy of £30K. All G40’s will come with an FIA-spec rollcage, effectively meaning you could drive to the Nurburgring, discover a race you’re eligible for, and roll straight onto the grid. Sounds like fun to us… Keep your eyes on evo.co.uk for more news from the Ginetta/Farbio deal Recap on the Farbio GTS350 via our test of it against Porsche and Lotus