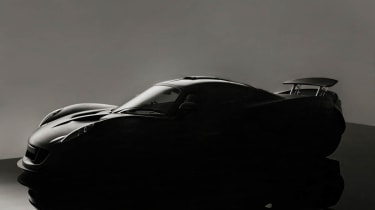 Here’s the first teaser picture and video of the Hennessey Venom GT, a Britsh-built bruiser with its sights set on the big-time. Based on a Lotus Exige, this pocket rocket – as the video suggests – will sport an entry level specification of 725bhp. The top engine package will stretch to 1200bhp, so it’s going to be no slouch. We’ve heard rumblings about some very swift statistics, with 0-62mph taking less than three seconds and a vmax on the scary side of 250mph.  Active aerodynamics will feature, along with a chassis developed in the magical ‘F1 triangle’ here in the UK. Although Hennessey is an American outfit, CEO John believes it’s important the car works on the harsher, more challenging British B-roads as well as on long straights. For this reason expect four catalytic convertors, four silencers and a clutch which can be operated by normal human beings. All very civilised then? Somehow, we doubt that.  There should be a full unveil at the Goodwood Festival of Speed this year. Don’t expect the Venom GT to be cheap, though…