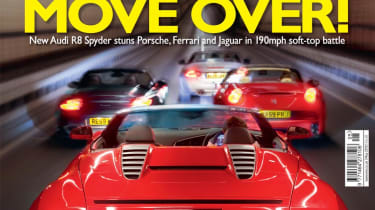 NewsPorsche shocked the Geneva motor show with its stunning 918 Spyder. Just how was it kept so secret? Also, why the UK is the cheapest place to buy good cars

LettersRemember the BMW 8-series? The evo forum-goers certainly do…

Audi R8 Spyder v Ferrari California v Jaguar XKR v Porsche 911 TurboThe sun is finally thinking about putting its hat on, so what better time for Audi to launch its drop-top R8 V10? Here it meets some of its tough and varied foes

Porsche Boxster Spyder v Ferrari 360 SpiderPorsche v Ferrari. It’s a classic battle, but in an alternative twist, we pit the new lightweight Boxster against a used 360. Where should your £45K go?

Long-term testsHarry tries to explain buying both a TVR Griffith and a Honda Insight in the same month, while it’s toodaloo to two fleet favourites – the Mercedes SL63 and Alpina D3

Ask the ExpertsHow do DSG gearboxes not spontaneously combust, plus other motoring conundrums answeredBirth of an Icon - Metro 6R4Pub ammo - it’s reckoned that the 6R4’s V6 was the first engine designed specifically for rally use