Aston Rapide to race at Ring 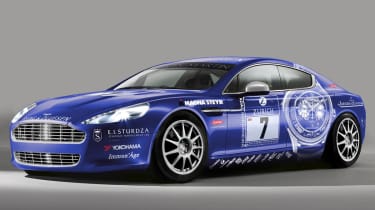 Aston Martin will be battling at the Nurburgring 24 hours once again. It’s the fifth consecutive year the British sports car maker will be tackling the Green Hell’s endurance race, though 2010 sees the debut of a new competitor – Aston’s Rapide saloon. It follows in the footsteps of more typical contenders, the V8 and V12 iterations of the Vantage, yet still looks very much a racer. We think the transformation from Quattroporte-rival to Ring-basher has been a successful one – it’s a cool looking thing. It’s fairly close to production spec, too, with the inevitable loss of interior trim and seats, some toughened suspension and the fitment of slick tyres and necessary safety equipment the only major changes. So why the Rapide? Aston chief Dr Ulrich Bez explains its appearance at the Ring – ‘this race represents the ultimate final engineering durability test for any sports car – it subjects the car to the toughest possible assessment under public scrutiny. ‘The Rapide has the capability to carry four people in comfort but first and foremost it is a sports car and we will subject it to the same tests we would our other sports cars.’ It will be joined by a V12 Vantage, competing at the Ring once again. The race takes place on May 15 and 16, and once again there’ll be an evo presence – Chris Harris will be competing in a Porsche 911 GT3 RS. Details here…