evo at the Ring 24 hours 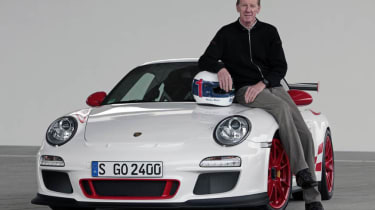 Evo’s Chris Harris will be racing at the 2010 Nurburgring 24 hours in May. Not only that, he’ll be doing it alongside Walter Rohrl in Porsche’s new 911 GT3 RS supercar. Chris you probably know from the wealth of evo videos he’s produced (including riding in a GT3 RS alongside Francois Delecour), while Walter is a double World Rally Champion and, more recently, a Porsche brand ambassador and professional test driver. He’s taken every production Porsche since 1993 around the Nordschleife, so he should be a force to be reckoned with when it comes to lengthy stints during the 24 hours. Read Chris’s reaction to his Ring 24 hours racing seat  Alongside Harris and Rohrl in Porsche’s team will be German Touring Car ace Roland Asch (who’s driven a 911 GT3 Cup in the Dubai 24 hours) and Horst von Saurma, a German motoring journalist who’s driven 911s in the Ring 24 hours before, as well as setting a Nordschleife lap record in a Porsche Carrera GT. Our Harris is the baby of the team, and at 35 is little more than half Rohrl’s age. Preparation is underway now, and the four of them will contest two VLN races in the GT3 RS to familiarise themselves with both track and car in time for the Ring endurance race on May 15 and 16. Needless to say, there’ll be plenty of coverage of the event and Chris’s progress before, during and after the race, so keep your eyes on evo.co.uk for the latest news. Read Chris Harris’s blog on his racing seat with Rohrl See Chris get a ride to remember in a GT3 RS on video See how evo’s John Barker got on in last year’s 24 hours