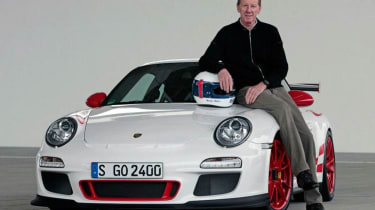 Legendary Porsche test driver and double world rally champ Walter Rohrl will take part in the 2010 Nürburgring 24 hour race. Not only that, but he’ll be piloting the latest Stuttgart supercar, the rather stonking new 911 GT3 RS. Rohrl will be 63 years old when the Ring race takes place this coming May, but you’d be unwise to bet against him doing rather well – since 1993 he has tested every production Porsche around the Nordschleife, so he should no both it and the cars quite well. The vehicle in question is the new 911 GT3 RS, with its new 444bhp 3.8-litre flat-six engine. It comes with a short-ratio gearbox designed for racing alongside dynamic engine mounts as standard, the latter changing in stiffness depending on the driving situation. This alters the connection between the engine and the GT3’s body, altering the dynamics and damping. And Rohrl is pretty pleased with his rear-engined race partner – ‘Right from the word go, the new 911 GT3 RS reminded me of a race vehicle. No other road-going 911 has ever been as close to a race car as this current GT3 RS. That's why I'm thrilled to be able to prove that this sports car is up to the challenge of the 24 hour race.’ The 2010 Ring 24 hours takes place on May 15 to 16. We’ll have coverage and news. In the meantime, have a catch up with our John Barker’s race at the 2009 race, with a full feature to read and video footage to watch. See what Chris Harris has to say about the new 911 GT3 RS Follow evo on Twitter or our Facebook page for latest car news