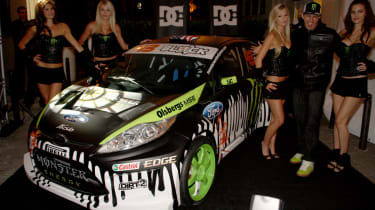 Having turned his back on his Subaru Impreza WRX STI earlier this year, Ken Block’s new Ford Fiesta has been unveiled and it’s a far cry from the supermini you’ll see on British roads. The Gymkhana 3 Ford Fiesta started life as a US-spec Fiesta, but has been converted by Olsbergs Motorsport Evolution - the same group that runs Block’s Rally America program - which has installed a custom-built engine and a six-speed sequential gearbox. The end result is a Fiesta capable of putting out up to 838bhp - though it has been detuned to 641bhp in order to give Block the torque band he needs to keep the car under control - and 660 lb ft of torque from 4000 rpm.  It takes just two seconds to rocket Block from 0-60 mph. The more aggressive bodywork also improves aerodynamics somewhat, though it still looks impressively close to the road car. In his own words, Block’s new Fiesta has been set up as ‘a car for tarmac that handles as if it’s on gravel,’ which is another way of saying that this supercar-slaying supermini will offer almost no grip whatsoever.  Definitely a far cry from the Fiesta you’ll see on British roads, then.

The Fiesta takes on its hot hatch rivals in Wales