Brake failure at 220mph, yet no-one was hurt when the 9ff GT9R crashed in the UK. Evo witnessed it. 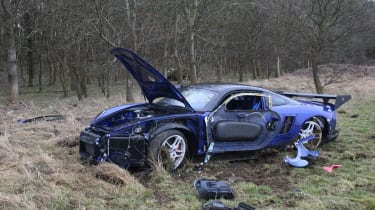 It was the silence that was unnerving. That was partly because just moments earlier the 9ff GT9R was howling at such ridiculous decibels that the noise meter must have melted its circuitry, and also because a period of silence, however fleeting, nearly always means trouble. And trouble it was.

The GT9R – best understood as the front half of a GT3 with a spaceframe rear, end housing a 1120bhp twin-turbo 4-litre flat-six and a car evo knows well having tested one flat out at Bruntingthorpe ourselves – failed to return to the VMax start-line area on the Bruntingthorpe Proving Ground’s back straight.

What none of us knew was that 9ff boss Jan Fatthauer and an accomplice had just broken the timing beam at 222mph – way faster than anything else present apart from another 9ff entry, and despite inappropriate gearing – but had then experienced a brake problem.

The company had been using the VMax event as a test session after the prolonged winter had hampered other testing. One of the 911s it had brought over was equipped with a new flat-shift system, while the GT9R, a car that's already managed 254mph at Papenburg in Germany, was fitted with development ceramic discs. These apparently overheated, delivering only 0.1g of stopping power.

Fortunately Bruntingthorpe’s a big place. The GT9R eventually hit a grassy bank at 75mph, according to the data-logger. Any faster and it would have been into the copse that borders the perimeter fence. Mercifully, a hospital check-up revealed all was well with the crew - and that contrary to expectations, the car should be able to be rebuilt.

VMax might be based on a simple philosophy, but this annual event is well-run and always has safety teams present. They were immediately on the scene and in minutes the air ambulance had landed. With the drama over, the otherwise enjoyable day continued, and it was studded with some great machinery. A Ruf CTR3, Mercedes SLR 722 McLaren, Ferrari 599, Murciélago SV, numerous Porsches and a pair of NSXs were amongst a healthy and broad spread of entrants.

The unexpected star of the show was an innocent-looking 996 Turbo Cabriolet owned by a client of 9ff’s. The deep, resonating thrum of its engine at idle should have given the game away – it was equipped with a 4-litre, 910bhp motor, a conversion known as the 9ff TRC 91. There was genuine shock when this old 996 Cab also passed the timing beam at 222mph. If you know Brunters, you’ll know that that’s very fast indeed.