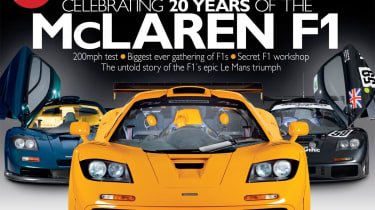 NewsIn a world exclusive, we meet the new Subaru Impreza Cosworth and speak to the people behind it. Meanwhile, the Porsche GT2 has got even madder and we investigate trackday noise limits LettersIt seems everyone agrees with Chris Harris. Apart from one person, who doesn’t. The mystery of mid-engine Polos is explained, too 20 years of the McLaren F1We celebrate one of the most significant, most intriguing and most downright desirable cars that motoring has ever seen. We start with the biggest ever gathering of F1s, before meeting some of the main men involved in its conception and design, Messrs Murray, Stevens and Dennis. We also drive Rowan Atkinson’s at 200mph, delve into the F1’s legendary Le Mans win and go on a Stateside trackday in one

SubscriptionsMcLaren F1 owners may get a gold-leaf engine bay and titanium toolkit as standard, but they still need to buy their own evo subscriptions

Morgan Aero SuperSports to MontlheryWhere better to take the latest madcap Morgan than Montlhery? It provides some handy alliteration as well as some fascinating nuggets of history

Project SevenWith Project Veyrog proving so successful, Caterham knew there was only one place to turn to for help developing its new Roadsport 150. We kick the project off with our latest long-termerLong-term testsThe Audi S4’s gone, but its space in the car park has been filled by Ollie Marriage’s 167bhp, six-geared purchase. Can you guess what it is yet?

Cars for saleThe best TVR is the Sagaris, and the best guide to buying yourself a fine one is right here

The KnowledgeIt’s new, improved and with some lovely boxes of trivia to impress your pals down the pub with

Ask the ExpertsHeading to the Nürburgring for the first time? Don’t go before reading John Barker’s sage adviceBirth of an Icon - Porsche 959It wasn’t built at Porsche’s Weissach factory, instead being the produce of a nearby bakery. Honest