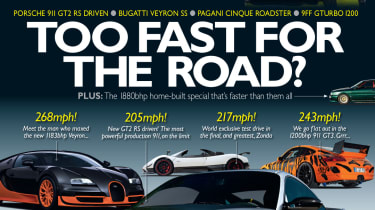 NewsThe Veyron has always wanted for more speed. Now it has some

On the cover: Porsche 911 GT2 RSAnother month, another new Porsche. This one’s a bit special, though: it’s lighter and more powerful than a Carrera GT. Chris Harris finds out what it’s like to drive

Top speed in a 9ff9ff’s new interpretation of the 911 is even madder than the GT2 RS. But not as mad as the man who maxed it

Europe’s fastest car……is an Audi Coupe from Yorkshire that does 0-193mph in 7.68secElectric carsWe try a plug-in Gullwing from Mercedes and a zero-emissions Radical, while a Tesla attacks Britain’s oldest racetrack

Mr Renault F1What does the owner of the Renault F1 team drive for kicks? We find out

Cars for SaleNearly new V8 muscle for £8000? It’s got to be the Vauxhall Monaro

Ask the ExpertsThe Maserati GranSport: an Italian curio or a true 911 alternative? You know who to ask…

NEW Me and My Car: Jonny Smith and his ChargerIn the first instalment of our new back-page feature, the Fifth Gear presenter shows us his rusty Dodge