Wanna see what Ken Block's been up to this time? Here's what you can get up to in a 650bhp Ford Fiesta. 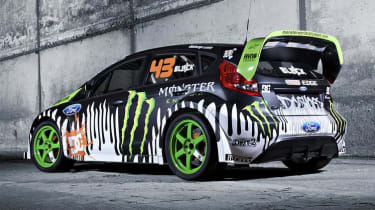 12
‘Come see us film Gymkhana’, said The Tall Man (Ken Block’s marketing bloke) from the  Monster World Rally Team, so I went on Saturday. It was very cool. Actually, it was cooler than that.

Ken Block doesn’t scrub tyres in the way other people scrub tyres in. I’m riding shotgun with him in his new Gymkhana weaponry – a 650bhp Ford Fiesta. Fresh rubber has just been fitted for the next scene.

He cuts a few girly weaves to release the oily surface layer, giving the vaguest suggestion of the car’s performance. And then just when I think he’s about to wander back to the surface truck BANG! he pins it in second and third, grabs a hoon-full of handbrake and pitches us way beyond the perpendicular, into something that feels almost backwards. The motor sits pinned to the limiter until the tyre smoke begins to fill the cabin. Ken gathers it up and just smiles.

This thing is ball-tearingly fast - on slicks it’s run 0-60mph in 1.9sec. It’s agile too – running a short wheelbase and three mechanical differentials for that trademark-Block-four-wheel-drift. In effect, it’s a Group B Fiesta – a Ford Duratec turbo’d to buggery and completely unrestricted.

Rubber scrubbed, he runs me through one of the scenes they’re about to shoot. And no, I’m not going to tell you what it is, but it involves horsepower, immense skill and tyre death. Ken’s control centre is simple, but very effective. He sits way back in the chassis, has a paddle shifter for the first time on a Gymkhana-steed and a massive, I mean MASSIVE handbrake lever embossed with the Ken Block logo, which he deploys at any opportunity. After which, he always grins.

The crew shows me some of the footage already shot. It’s mind-blowing stuff and takes the Gymkhana franchise to new levels. Again, the Tall Man lurks, should I attempt to record any of it.

But what you need to know about Gymkhana, is that on location, it’s even cooler than you could ever imagine. If a product is nothing more than a reflection of the fun people have making it, you can see how Block & Co turned a day’s cocking about in an Impreza into a global sensation. The recipe is just the same today, but the budget is bigger. I’ve never seen people having more fun working, not even in the porn industry. When Ken nails a take, they whoop and cheer like paying spectators. In no way does this constitute work. It’s a bunch of people with the best camera equipment, recording a bloke behaving appallingly in an approximation of a modern-day Group B Fiesta.

And the man himself, what does he think of it all, does he still enjoy it? ‘Of course there’s pressure because we need to take it to the next level, but when I’m in car it’s real fun.’ Typically, he couldn’t look less pressured.

‘But I think people are going to love what we’ve done here.’ They won’t have to wait long. The film airs in the next few weeks, and having seen some of it - experienced the machine and its handler, it’s going to be the viral movie of the year. Gymkhana: being paid to drift a 650bhp Fiesta. God I wish I’d though of that.

And yes, The Tall Man did remove the blind-fold, eventually.