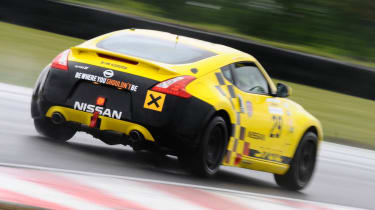 Miguel Merchan, Michael Humphreys, Simon Clark, Matt Thompson, Vince Whittle, and Tommy Lee. Heard any of these names before? Well soon one of them will be being announced over a Tannoy to an expectant crowd as the driver of a race-prepped Nissan 370Z at the last round of the Dunlop Sport Maxx Cup. That’s the prize for the eventual winner of our Dunlop Race Academy competition, which has seen us searching for untapped driving talent amongst the 2010 evo trackday attendees.

Humphreys and Merchan were the final two drivers to be picked, after they impressed BTCC driver Steven Kane and evo News editor, Ollie Marriage, at our most recent Bedford track evening. Both are living proof that it’s not what you drive but how you drive it as you could have bought both their cars for a combined total of under £5k. Humphrey’s Pugeot 106 Rallye and Merchan’s 15 year-old Vauxhall Cavalier were both driven quickly and committedly on the very wet track evening, occasionally humbling much more potent machinery. All very impressive.

Now, as I write this, all six finalists will have their noses buried in the legendary MSA Blue Book of rules preparing for a rigorous day’s assessment at the final evo Trackday of the year at Silverstone on 8th September. Each driver will have half an hour’s assessment with Calum Lockie and half and hour’s assessment with Simon Shaw. The cars they drive will not be their own, but the race-prepared Nissan 370Z and a Clio 197.

After their driving assessments they will have to undergo a media assessment to see how they would handle Martin Brundle shoving a microphone at them five minutes before a race (or Murray Walker prodding their forehead afterwards). The points from these tests will then be totted up and the top three announced. Those three will then have to sit an ARDS racing licence test before the overall winner is announced. It should be quite a day…

Read some of the finalists’ blogs here