Evo at the Britcar 24hrs

Dickie Meaden and Ollie Marriage are racing the 24hr at Silverstone. Dickie's a veteran, while this is Ollie's first ever race... 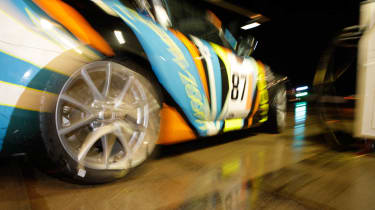 I’m wondering if I’ve bitten off more than I can chew. But you don’t pass up the opportunity to race in the Britcar 24hr at Silverstone, do you? Even if you don’t have a race licence…

ARDS test, medical and eye test were all straightforward, but I’m not exactly in my comfort zone. Yes, I’ve done plenty of timed laps at Bedford, track days and a couple of seasons in the British rally championship, but excited anticipation has never given way to a certain wariness. I haven’t driven Silverstone in ten years. I’ve missed all the warm-up sessions due to the Paris Motorshow and magazine deadlines. I’ve never been on a circuit at night, or had to fight tooth and nail for track position. And it’s raining for qualifying…

As Dickie put it to me a few minutes ago, I’ve got all my excuses in the bag early on.

Nervous, then? Strangely, no. Jota Motorsport, who are running a pair of MX-5s for Mazda UK, are a very professional, friendly outfit, the race-prepped roadster isn’t intimidating in the slightest. What frightens me is the closing speed of the Mosler’s and Porsche’s on the Hanger Straight. Oh, and night qualifying in the wet. That goes without saying.

So how was it. Absolutely brilliant. Huge fun. Once out of the pitlane, you drive on instinct. You don’t know where the track goes, but nor, it seems, do most other people. Four laps passed in a blur of grip/slip and dancing lights. Now I can see what all the fuss is about. Now I’m wishing I’d got into this 10, 15 years ago.

Just got in from warm-up. It's dry and sunny, so we're on slicks and 25 seconds a lap faster. I've been a pillock though. Having followed him for a lap, I thought a slower car ahead, who'd been rather wayward with his lines, was taking a wider line to let me through. No. He turned in at the last moment, and we touched. Lightly, thank god, so there's not even a dent, just a scuffing of rubber on the front wheelarch. Feel an idiot, though. This is warm-up, NOT the race. Monday 9.26am Call me naive, but I thought that taking part in a 24hr race would give me plenty of time to head up to the media centre and keep you updated. Not a chance. Driving and sleeping (plus the associated hanging around in the pit garage) easily ate up the whole 24hrs. Anyway, here's a quick precis of what happened. Two MX-5's were taking part and in my absence, it was decided that I should do the start. It's a rolling start so nothing much to worry about - especially since we were starting from the very back of the grid. I'll chalk that qualifying effort down to inexperience and unfamiliarity. The car was a honey from the get-go, though: loads of front end grip and easily-gathered rear end breakaway when it did let go - there was a slight tendency for roll oversteer through quick corners. I had a great dice with the other back-markers, actually managed to grab a few places and kept well out the way of the fearsomely fast stuff which started lapping us after around lap 4. Two and a bit hours later when I handed over we'd gone from 57th to 48th. Pretty happy with that. And then it started raining. We never had a dry lap again. Sterling efforts by my team mates meant that by 1am when I was next in car 87 we'd gained a few more places.  Read about Dickie's adventures in the 370Z Night racing is an acquired taste. I'd loved qualifying in the dark, but in the race, when it was raining and the safety car came out after ten minutes, I have to say I wasn't enjoying it much. In the yellow flag convoy (caused by thick fog and numerous spins) you stop concentrating on your driving and start thinking about how clammy your still-sweaty overalls are, how your helmet is giving you a headache, how the earplugs jab, how you've got to endure two hours of this and - oh - is that some bladder pressure I'm feeling? When the safety car pulled in, I wasn't feeling great about getting racing again. Two corners later adrenaline had quashed any discomfort and two hours passed in a blur of corner guesswork, braking panic and dazzling pulses of light as the quick stuff howled past down the Hanger Straight. It's a proper challenge, racing at night, and I can see why it can freak some people out, but personally, I could have stayed out there all night. As long as there was no safety car. See more pics on Ollie's gallery Five hours sleep felt like a luxury, and I headed back to the pits at 9am full of energy and optimism. Not such a happy site. Car 86 sat forlornly in the garage having developed a mechanical fault after 17 hours of hard racing. It was gutting as it had been running as high as second in class, ahead of vastly more powerful, lighter, quicker cars such as Honda Civics and Integras.  We weren't doing so badly either - in the thick of it class-wise, battling with BMW 130's and the like, and mid-thirties overall. The rain had caught out so many. Mid-way through my last session, from 11am-2pm, I was accelerating out of Copse as a big Marcos came out of the pits and ahead of me into the Maggotts/Becketts complex. He span right in front of me. On the next lap round the safety car was out and I saw him in the wall at the start of the Hanger Straight. He'd obviously got going again, only to crash two corners later...  The greasy conditions at this time were hideous. Copse, which had been fourth gear and 90mph+ in the dry, was 70mph in third, lap times softened from 2 mins 20sec to 2mins 40sec plus. When more rain arrived, grip improved - odd. Visibility, however, deteriorated. When the quick Moslers, Ferraris and other ground-effect stuff came howling past, sucking water up from the track into huge rooster tails, I knew what it must be like when you see the F1 onboard footage of them driving blind. It's quite deeply frightening, even at 100mph, as you desperately search for your braking point. Spray even built on the inside of the screen, which the blower did little to clear. But despite that I managed to catch and pass a couple of competitiors, getting us up to tenth in class. That was great fun, getting information on time gaps and the like relayed over the radio, stalking them and gradually closing them down in the plucky little MX-5. And that was about it. I handed driving duties over and two and half hours later, to much cheering and general joy it was all over. We finished 34th out of 52 classified finishers, proving that the key to a good result in endurance racing is just to stay out of the pits. We made 11 stops in total. Others made upwards of 20. Speaks volumes for the MX-5's reliability, drivability and composure.   And that's what'll stay with me. Yes, the car was being run by a properly professional outfit in Jota Motorsport, but that any near-standard road car can endure 24 hours of continual abuse, cover 1520 miles and need nothing but a constant supply of fuel and drivers, despite being thrashed to within an inch of its 7500rpm life, is quite frankly amazing.

The Mazda MX-5 is better than ever, a distillation of the sports car that has matured into a brilliant little roadster
Mazda MX-5 R Sport 2020 review – floats like a butterfly, but stings like one too

Quicker than the standard car, but BBR’s latest MX-5 focuses on experience more than performance, and is all the better for it
Mazda MX-5 Mk3 (NC) – review, history, prices and specs

Mazda’s third MX-5 didn’t quite hit the mark when new, but is now an affordable way into a fun rear-wheel-drive platform