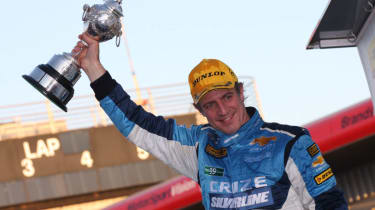 Jason Plato secured his second BTCC crown with a dominant display at the Brands Hatch Indy circuit this weekend. His 2010 championship rivals fell by the wayside as he took the first two chequered flags of a three-race round.  A good start meant Plato got the jump on nearest title rivals Matt Neal and Gordon Shedden in race one, finishing over two seconds ahead of the Hondas, while title rival Tom Onslow-Cole retired with gearbox issues, ending his chances of catching the Silverline Chevrolet and the title itself. Race two saw a similar story as the 42-year-old secured the title, leading the race from green light to chequered flag.  The win saw Plato match the career wins of British Touring Car legend Andy Rouse and secure the drivers championship for the second time. 'It’s the perfect end to an amazing season', said Jason. 'It took us a while to get going but by the end of the season we had a car that was unbeatable, thanks in no small part to the hard work and dedication of my team. We knew we could do it, and we did!' Having recently confirmed its entry for 2011, Honda Racing secured the team championship, while Tom Chilton took the Independents Cup in the LPG powered Ford Focus, with Team Aon winning the Independents Team title.  The last race of the day (and season) was won by Andrew Jordan in his Vauxhall Vectra, benefiting from the reverse grid that saw him start on pole.