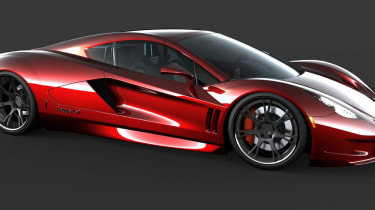 Bugatti is used to having manufacturers trying to beat the Veyron’s top speed, but the 2500bhp Dagger GT, built by TranStar Racing, plans to decimate the Veyron Super Sport’s record by being the first production car to go beyond 300mph.

Based closely on drag racing technology, the latest update to the prototype is a new aluminium chassis, which replaces the steel one, and has been adopted in an effort to bring the weight down.

It’s powered by a 9.4-litre twin turbo made by big engine specialists Nelson Racing Engines, which produces either 2000bhp (in base trim!) or 2500bhp. Both meet the US’s main environmental regulations, but not those in California (the world’s strictest), so the firm has just announced a new 7.0-litre supercharged engine with a mere 836bhp.

If you want to experience the full 2500bhp, you’ll have to fill the car with a racing fuel mix – fill up with regular octane at your local garage and you’ll only get a piffling 1700bhp.

The performance claims are suitably astonishing. When Evo figured a Veyron, it completed the quarter mile in 10.5secs at 140.2mph. TranStar claims the Dagger GT will do it in just 6.6secs at 204mph. The team believes, and intends to prove at Bonneville, that it will carry on to a top speed of 314mph.

Ultimately, the Dagger GT promises to be a drag car for the road. Its manufacturer, TranStar, recommends: ‘if you want to go 300 mph, you should, at a minimum, purchase all the safety options available… There are some very good aerodynamic reasons the so-called supercars have not broken 300mph. This is the danger zone and you must take precautions before attempting these speeds.’