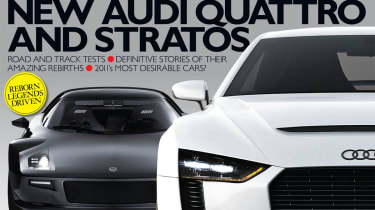 Buy a copy of evo 153 in our online shop

NewsWe attend the long-awaited launch of Gran Turismo 5 and a lucky Michael Schumacher gets to meet Harry Metcalfe DrivenFirst drives of the Lamborghini Performante Spyder, Citroen DS3 Racing, Ford F-150 Raptor, K-Tec Renaultsport Megane and a load more. There’s even a diesel Audi A2 LettersA Porsche 911 has finally been crowned evo Car of the Year, stirring up a bit of response from you lot  Original Stratos v original QuattroThe new versions inspire an entirely gratuitous twin-test of their predecessors. But we doubt you’re complaining BBR MX-5 Turbo rebornBargain of the year: £7500 for a 220bhp, lightweight rear-drive roadster. We drive (and slide) it Ken Block’s FiestaChris Harris tries the star of Gymkhana 3, Ken Block’s utterly crackers 650bhp Ford Fiesta Porsche 911 GTS to El MirageA fitting tribute for the final 997 Porsche would be a full-bore high-speed run in the Mojave Desert. But then the best-laid plans… Dakar Volkswagen Race TouaregPowerful off-road racer + abundance of snow = very happy Henry Catchpole Subaru STI v VW Golf R v Mitsubishi Evo The fast four-door Subaru returns. We introduce it to an old foe and  one of the new kids on the block Long-term testsThe Subaru STI gets its Fast Fleet introduction, alongside another sports saloon. One which boasts 370bhp and rear-drive… Buying guide - Honda Civic Type-RThe high-revving hot hatch is no longer in production. Find out how to buy a good used one here Ask the ExpertsCan a single car journey produce your body weight in CO2? This question and more answered here Me and My Car - David Smith and his Mitsubishi Evo VII130,000 miles, £40,000 of fuel consumed and a go-kart on the roof. Meet an Evo like no other

Buy a copy of evo 153 in our online shop