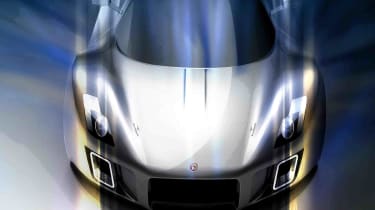 A new version of the Gumpert Apollo, called the Tornante is due to be released in 2012. It has been designed by Milan based Touring Superleggera and will be shown at the Geneva Motorshow at the beginning of March. Although hard to see from the one released sketch, it will be a design that adds a little more comfort and refinement to the currently very motorsport orientated Gumpert Apollo.

Touring says it wanted to respect the fundamental competition-derived aerodynamics, performance and dynamic properties of the Apollo, but add an air of elegance and ergonomics to what, in standard trim is a very uncompromising design. The Tornante will, however, retain the 700bhp 4.2-litre bi-turbo V8 of the Apollo, so although the idea might be to produce a slightly more cosseting car, it should still be stunningly fast. A TT40e gearbox will have paddle shift as standard to aid ease of use and the double wishbone suspension will be adjusted for the new ‘fast touring’ ethos. What is currently described as ‘an alternative powered Tornante’ is also in the pipeline for 2012, which we assume must mean a hybrid of some description… See more from the 2011 Geneva motor show