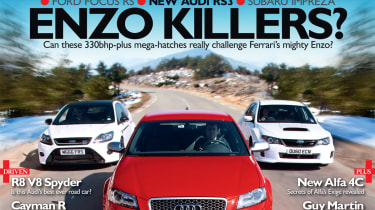 Buy a copy of evo 156 in our online shop

Favourite giant-killing momentsEveryone loves underdogs, especially when they win. We recall their finest hours, from Senna’s first moment of stardom to the Clio Trophy on eCoty 2005

Guy Martin tries a WRC FocusThe new-age Fred Dibnah is pretty nifty on a motorbike, but can his two-wheeled bravery translate to a World Rally-spec Focus? We head to a Cumbrian forest to find out

BMW 3.0 CSL v M3 GTSAn old big-winged Beemer versus a new one. Both are brilliant, but in different ways…

Me and My Car: James Hatfield & his Civic Type-RA Type-R fanatic builds his dream combination - an old-school Civic with a DC2 Integra engine

Buy a copy of evo 156 in our online shop