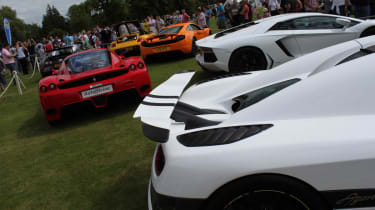 It was an honour to be invited to participate in the 2011 Wilton House supercar extravaganza, following last year’s fun when Godzilla 2 (my grey Nissan GT-R) and I got to play with a McLaren F1 GTR at Thruxton beforehand. This year, having met up with the main convoy at Fleet services at an unnaturally early hour, we made our noisy way up to the historic Gurston Down hillclimb, and after a briefing, lined up to have a go at the short but challenging 1057 yard course. There was no official timing, but I used the GT-R’s onboard lap timer to record a 38 second run on my third attempt, which I thought was quite reasonable. Until I heard that the course record was a scarcely believable 25 seconds... This was probably the first event ever where a Ferrari Enzo, Lamborghini Aventador and TWO Bugatti Veyrons have tackled an MSA hillclimb. It was incredibly uplifting to see the owners of such rare hypercars exercising their steeds properly, and at such an unforgiving venue. It was then a short drive to Wilton House to be greeted by crowds even larger than 2010’s. It was humbling and slightly unnerving to be surrounded by thousands of car fans who lined the entrance to the grounds and driveways of the stately home, all of whom were exhorting us to “Rev it! Rev it!” Although normally considered purposefully vocal, poor old Godzilla’s voice was all but drowned out by the unsilenced Italian exotica, particularly Autofficina’s de-catted, straight-piped Ferrari Enzo that went on to win the decibel meter sound off, with an eardrum shattering 129dB.  Once parked up on the Earl of Pembroke’s lawn, the 170-odd supercars - plus some rare and valuable classics - provided plenty for visitors to ogle.  So an epic day spent rubbing shoulders with human and automotive aristocracy, a spot of amateur motorsport, great weather and raising money for the Salisbury District Hospital “Stars Appeal” charity. The event is growing rapidly and is already considered “the Goodwood of Wiltshire”. It’s a must-attend for any petrolhead within travelling distance.

Video from the event...

Subscribe today to have every issue of evo delivered straight to you. You'll SAVE 39% on the shop price, and get evo for its original cover price for a whole year!
Subscribe now
Thanks to David Yu and Nick Williams (NWVT.co.uk) for the pictures
Advertisement
Follow us on TwitterFollow us on FacebookEmail us
Advertisement
Advertisement