The Brands Hatch GP race has turned what was an already close championship, into possibly the most unpredictable BTCC title fight ever. Report and gallery here. 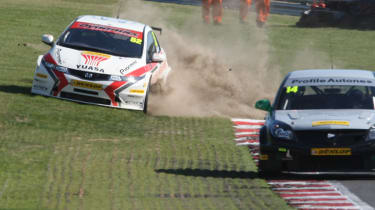 After an unbelievably close trio of races, five of the top championship contenders still have a shot at the title going into Silverstone, the final round of this year's Dunlop MSA British Touring Car Championship. Matt Neal, Jason Plato, Gordon Shedden, Mat Jackson and James Nash have all been fighting hard this season, with no clear-cut winner. Jason Plato was on top form this weekend, taking pole position and the first two wins, but the Honda Racing Team struck back in race three with a magnificent Neal and Shedden 1-2 finish.

Both Hondas suffered from punctured tyres in the first race (finishing in 18th and 19th), and after qualifying on pole, Plato took the first win of the day in the Silverline Chevrolet Cruze, closely followed by Mat Jackson in the Airwaves Racing Ford Focus, and Alex MacDowall in the sister Cruze. MacDowall was initially on track to make it a 1-2 finish, but slowed down on the final lap, allowing Jackson to slide past into second place. Andrew Jordan in the Pirtek Racing Vauxhall Vectra, who qualified second fastest on Saturday, failed to start the race after suffering engine problems in the pits.

Starting from the front again, Plato lead the entire race, raking in a tidy amount of points. Enough to take him to the top of the championship leader board. Mat Jackson was also pushing hard to take another second place position, this time followed by close rival Tom Onslow-Cole in the Team Aon Ford Focus. The Honda Racing Team Civics of Matt Neal and Gordon Shedden made up significant places to finish in seventh and eighth.

Race 3 offered the Honda Racing Team a chance to regain some points, and the team took all they could. Starting from fourth and fifth on the grid, the pair soon took control of the race, and they went on to take a 1-2 finish in style. This also pushed Matt Neal back to the top of the championship after Plato finished the race in a respectable sixth place.

Plato, who is not optimistic about his chances at Silverstone, commented: 'Realistically I think that’s as far as we can go. We’ve made up some massive ground today, but Silverstone is going to be ideally suited for cars with turbo engines, which we don’t have. It will need something very strange to happen there to stop the Hondas, but never say never...'

Championship leader Matt Neal said: 'A 1-2 in race three is a relief because at one stage today it really looked like the title was slipping through our fingers through some bad luck. Being back in the lead means my car will start the Silverstone weekend carrying the maximum 45kgs of success ballast, but I’d rather have points in the bag any day.'

The next and final round of this year's BTCC, will be held at Silverstone on 16 October. For more detailed race results and championship standings, visit www.btcc.net.