The latest round of crash test results have just been released by Euro NCAP, with top scores for the new Range Rover Evoque and Mercedes C-Class coupe 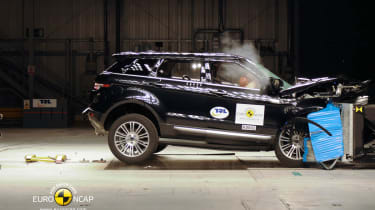 Everyone loves a good crash test – there are no better excuses for writing-off a brand new car, after all – and the latest round of Euro NCAP results have just been announced.

Once again, safety scores carry on going up – of the 17 cars tested, 11 managed the maximum five star rating and the remaining six cars won four stars. Jaguar Land Rover had mixed fortunes – the Range Rover Evoque scored a full five stars, but the Jaguar XF – which was being retested with revised safety equipment, couldn’t better the four stars that a pre-facelift car managed last year. Not that it was all good news for the Land Rover, either – the Evoque’s pedestrian impact score was just 41 percent, with the leading edge of the bonnet scoring no safety points.

Other highlights included five star ratings for the Mercedes C-Class coupe and the new B-Class hatch – which managed a top score of 97 percent for adult occupant protection. The Chinese Geely Emgrand EC7 also managed an overall score of four stars, the first decent performance for any Chinese-made car in a Euro NCAP test.

You can check out all the results here – and here’s some video of the Range Rover Evoque being crunched in almost-gratuitous slow motion: