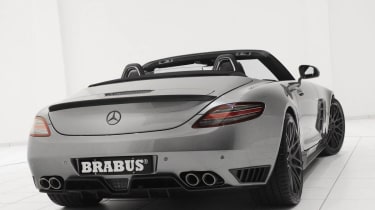 Famed Mercedes tuner Brabus has pulled the wraps off its take on the SLS AMG Roadster. Unveiled at the 2011 Essen motor show, there are a host of changes to distinguish this Brabus SLS from its standard Merc cousin. As always, the key change takes place under that long front bonnet. The regular SLS AMG’s 6.2-litre naturally aspirated V8 engine sees its output rise from 563bhp to 603bhp. It’s a healthy hike which can give thanks to a new sports exhaust system with 84mm-diameter quad pipes. There’s no word on the performance figures this yields, but expect 0-60mph to take less than four seconds and a delimited top speed, allowing the SLS past 200mph (it’s pegged back to 197mph in factory trim). A higher top speed should also be helped by improved aerodynamics, the Brabus SLS benefiting from a carbonfibre bodykit. There’s a front spoiler, new front and side vents, side skirts and a rear spoiler and diffuser, which integrates that monster new exhaust. The kit is available with high-gloss and matte finishes. The new look is topped off with Brabus ‘Platinum Edition’ forged alloys, which measure a staggered 20in front, 21in rear. There’s also new technology under the skin – Brabus Ride Control can lower the car by up to 40mm and there’s a choice of different damper settings, while a front lift system nudges the SLS’s nose up by 50mm to aid the clearance of humps and bumps. There are no firm price and spec details, but with Brabus’s 690bhp SLS coupe costing 245,500 euros, you can expect to pay similar money for a less potent but cabrio-roof equipped Roadster. Therefore expect little change from £250,000, an unsubtle £73K rise over a standard SLS AMG Roadster.

Review and video of the Mercedes SLS AMG Roadster

Browse all of our Brabus news and reviews here