The 2011 Race of Champions contest pits Vettel, Button and Schumacher against Coulthard, Ogier and Albuquerque 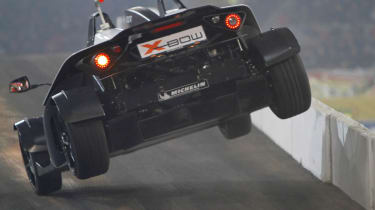 The 2011 Race of Champions takes place on the 3-4 of December at the ESPRIT Arena in Dusseldorf, Germany. It’s the event is that pits the world’s greatest drivers from numerous motorsport disciplines against each to other to find out who is the world’s best racer. For those of you unfamiliar with the event, it uses a specially constructed figure-of-eight circuit which features two parallel tracks and a cross-over bridge. This means that two drivers can start alongside each other in identical cars and still drive exactly the same piece of track. The event features a team contest, the RoC Nations Cup, and an individual ‘Champion of Champions’ competition. Drivers taking part this year range from seven-time F1 champion Michael Schumacher and the reigning, back-to-back F1 title-holder Sebastian Vettel to Moto-X rider and rallycross driver Travis Pastrana and the 2011 DTM champion Martin Tomczyk. Others include Britain’s pairing for the Nations Cup, Jenson Button and Andy Priaulx, plus F1 drivers Vitaly Petrov, Timo Glock and Romain Grosjean and last year’s Champion of Champions, the Portugese DTM driver Felipe Albuquerque. Several cars will be used during 2011’s event, including the Audi R8 LMS, Skoda Fabia S2000 rally car, KTM X-Bow, Volkswagen Scirroco Cup and the ‘ROC Car’ which is essentially a light-weight buggy with a 170bhp motorcycle engine.  Away from the main competition the event also features several vehicle demonstrations. In the past they’ve included Moto-X displays, Formula 1 cars and a Audi Quattro S1 rally car. A legends race is also scheduled with Heinz-Harald Frentzen, Jos Verstappen, Hans-Joachim Stuck and Marc Duez taking part. The Nations Cup takes place on the Saturday December 3 and the main event – the Champion of Champions competition – is on the Sunday.

Read about and watch action from the Race of Champions 2010