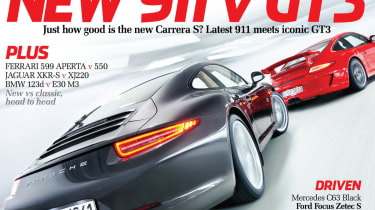 Buy a copy of evo 165 in our online shop

NewsWe get up close and personal with Toyota’s new affordable sports coupe, and there’s a report from the LA motor show

BMW 123d v E30 M3The original M3 is our favourite M-car, but BMW now offers a 2-litre diesel hatchback that’s faster. We put them together on B-road and track to see if the young upstart is as thrilling as its ancestor

Jaguar XKR-S v XJ220The legendary XJ220 returns to the Nürburgring, where it set a lap record in the ’90s. Waiting for it is a new Jaguar coupe with the same power figure

Ferrari SA Aperta v 550 barchettaEssentially a drop-top 599 GTO, Ferrari’s new V12 soft-top could be its best. Harry Metcalfe and his 550 Barchetta chaperone an excited owner as he collects his new car

Track Car of the YearIf you take your track cars seriously, you’ll want one of this lot. Ariel, BAC, Caterham, Ginetta, KTM and Radical fight it out

Long-term testsFind out who’s fastest as a bunch of our staffers and their cars spend a day on track, with their very best excuses in tow

evo KnowledgeHow to bag a bargain Honda Civic Type-R, plus a guide to driving the Isle of Man’s mighty Mountain Road

Me and my carA rocker and his Roller: AC/DC’s car-mad Brian Johnson and his Phantom

Buy a copy of evo 165 in our online shop