Firmer details and new pictures of the Eterniti Hemera 'Super SUV', plus the company's plans to go racing 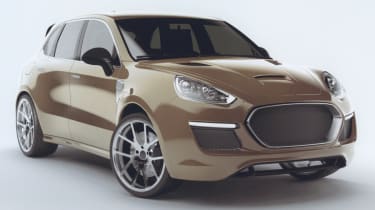 Eterniti has revealed more details of its new ‘super SUV’. The Hemera caused a mild stir at the 2011 Frankfurt show, being a British-built but Porsche Cayenne-based luxury car costing upwards of £150,000. With luxury car sales very slow (Mercedes has just axed Maybach), its hopes of success looked less than certain. Sales forecasts start at 50 next year, rising to 300 annually by 2014. Ninety per cent of sales will be in Asian markets, the remaining cars split between the Middle East, Russia and the UK.  That’s because it’s exactly what the wealthy Chinese car market desires, apparently; while the Hemera boasts more power and aggression than the Cayenne Turbo that underpins it, its rear boasts an extra 120mm of legroom, with the seats moved back and split into two individual chairs (with an iPad each) rather than a three-seat bench. It’s a car to be driven in, but one which is more fun and ‘young at heart’ than a typical limo, says Eterniti. Ride quality won’t match a Mercedes S-class, but the Hemera will serve up a more fun-to-drive experience when its owner hops into the driver’s seat for a longer journey away from town. And much investment and expertise is being poured into this department. The Cayenne’s 4.8-litre twin-turbo engine has its power lifted from 493bhp to past 600bhp, with some light tuning and a tweaked exhaust system, which includes the removal of two cats. Should make it sound as OTT as it looks, then… Ex-Formula 1 ace Johnny Herbert and renowned motorsport engineer Alistair Macqueen (he’s spannered several Le Mans victors as well as the Jaguar XJ220) are working on the car’s engineering and dynamics and report it’s pretty handy around a go-kart track, of all places. ‘Think of it as SUV meets BMW M5’, says Macqueen. The ultra-plush interior means it’ll weigh more than a standard Cayenne, though. All structural bits from the Cayenne remain (hence the identical windowline) but every other panel is binned in favour of Eterniti’s moulded carbonfibre replacements. The styling isn’t yet finalised, but will look largely identical to the car pictured above. Stock Cayenne Turbos will be shipped from Germany to Eterniti’s Park Royal base in London, where they will be rebuilt before being sent to customers. A long-winded production process, perhaps, but one that the company hopes will win the Hemera its Chinese sales, the Asian market paying the utmost respect to British manufacturing. Prices will start at £150K, but with most customers likely to design entirely bespoke cars, they could easily end up paying more than twice that. It’s hoped the Hemera kicks off a range of Eterniti products, with exclusive models (i.e. no base cars borrowed from other car makers) in the company’s long-term plans.  Macqueen even spoke of a desire to go racing, with Eterniti’s wealth of former-Le Mans talent in the engineering team – much of its payroll is ex-motorsport – a stab at the iconic 24-hour race could lie in the future. A limited road car spin off (a la Toyota GT-One) was even mentioned… The production-spec Eterniti Hemera will be revealed at the 2012 Beijing motor show in April.