A new concept from Bertone marks the company's centenary year. 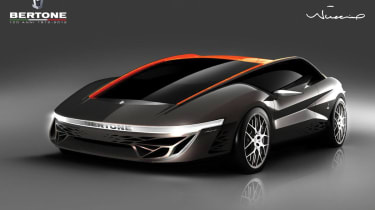 Built to celebrate the 100th anniversary of Turin-based design house Bertone, the Nuccio is named after the son of Bertone's founder - the man who took charge of the design house following WWII and styled a great many concepts. It's destined to be unveiled at the Geneva motor show on 6 March.

Designed by Bertone Design Director, Michael Robinson, the Nuccio is powered by a mid-mounted 430bhp V8 engine, and takes its influence from the 1970 Lancia Stratos Zero concept.