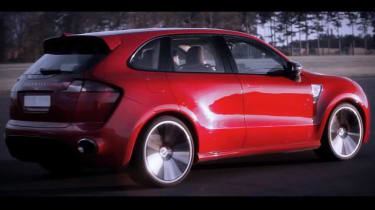 Eterniti has released a video showing its £252,000 Artemis super SUV in action. Previously called the Hemera, the Porsche Cayenne Turbo based creation features the same 4.8 twin-turbo V8, its power boosted from 493bhp to 600bhp allowing 0-62mph to be completed in 4.5sec on the way to a 180mph top speed. All this is achieved whilst rear passengers are enjoying the twin reclining seats, iPad holders and a drinks chiller. Eterniti calls it the ultimate crossover, and decks it out with stonking 23in forged alloy rims to try and prove its point. Eterniti is beating its other super SUV competitors (Bentley, Maserati and Lamborghini) to the market with production beginning in London this summer, the first cars going to buyers in autumn.