A preview of the 2012 Goodwood Festival of Speed, with everything from Formula 1 stars to a reverse speed record attempt 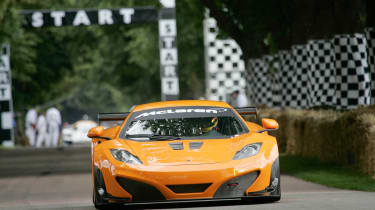 The 2012 Goodwood Festival of Speed starts on Thursday 28th June and the organisers have, as ever, put together a mouth-watering collection of cars and drivers.

An incredible mix of racing drivers will be present all weekend, from Stirling Moss to Lewis Hamilton and Jenson Button - who will both be driving their 2011 McLaren F1 cars up the hill. evo's Tiff Needell will also be piloting the brand new BMW M6 in the Supercar run.

But it's the cars that we all go to see and arguably the star attraction of the weekend will be the course record holder, back after a 13-year sabbatical.  The McLaren MP4/13 is at Goodwood for the first time since its record-breaking 41.6sec run up the hill at the hands of Nick Heidfeld. And he'll be the driver gunning for an even quicker time this year.

Allan McNish will be piloting the Audi R18 e-tron Quattro up the hill after it became the first ever hybrid to win Le Mans this year, and Toyota's rival TS030 Hybrid will make its first appearance in the UK following its competition debut in the famous 24-hour race.

Jaguar's F-Type prototype will be displayed for the first time, and will make its way up the hill alongside supercars including the Gumbert Apollo S and Koenigsegg Agera R.

Lotus will be featured heavily over the weekend as Goodwood marks a series of important anniversaries for the marque. Over 40 cars from seven decades will take to the hill representing all aspects of Lotus's history, from F1 and Indycar racers to the brand new Exige R-GT rally car.

Nissan's GT1 GT-R will be aiming for the course record, but Nissan also has its eye on another record with the electric LEAF. It will attempt to complete the 1.16-mile Goodwood hillclimb as fast as possible in reverse, potentially also setting a new Guinness World Record for the fastest time mile in reverse. Theoretically, the LEAF's electric motors should propel the car as fast backwards as it goes forwards. Its claimed top speed is 90mph...

Tickets are still available for Thursday, Friday and Sunday but all Saturday and weekend tickets have sold out.