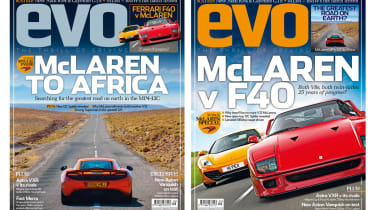 Buy a copy of evo 173 in our online shop

NewsAMG’s staggering new-model plans, more details on the next Renaultsport Clio and a fond(ish) farewell to the Mazda rotary

McLaren to MoroccoMorocco contains some of the world’s greatest driving roads. The problem? They’re potentially unreachable. We head there in perhaps the only supercar up to such an epic journey: McLaren’s MP4-12C

Updated 12C drivenThe MP4-12C hasn’t been without its detractors since launch, though, so McLaren has launched an updated – and more powerful – version. Catchpole takes it up the world’s most famous driveway

McLaren’s futureHarry Metcalfe spends the day with McLaren MD Antony Sheriff. How does McLaren plan to tackle the supercar elite?

New Aston Martin VanquishThe Vanquish is back. Richard Meaden joins the test team as they fine-tune its set-up on frozen Swedish lakes

Long-term testsWe swap one Audi for another far torquier one, and our Range Rover Evoque battles Elises and 911s on track. Kind of

Buy a copy of evo 173 in our online shop