A new carbon fibre-clad Aventador from Mansory, known as the Carbonado, and 1200bhp twin turbo Ferrari F12 has been shown at the Frankfurt motor show. Details, pictures and videos here. 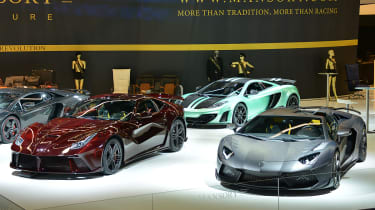 Swiss car maker Mansory has been showing off its new customised versions of the Lamborghini Aventador and Ferrari F12 at the 2013 Frankfurt motor show.

The bespoke Ferrari F12, given the name ‘La Revoluzione’, has been completely stripped down, and then rebodied in carbon fibre – produced by Mansory. Thanks to a pair of turbochargers, and a new exhaust, the 6.3-litre V12 is now pushing out a Bugatti Veyron-bating 1200bhp. It’s on the market now, and will cost 1.3m euros.

Also on show was the Mansory Carbonado – also known as ‘The Black Diamond’ – featuring naked carbon fibre, pretty much everywhere and anywhere possible. Almost every panel has been swapped for a bare carbon fibre counterpart, and as a result the width of this already large car has increased by 40mm at the front and 50mm at the rear.

Other modifications from the standard supercar include a new high performance exhaust, which thanks to a pair of turbochargers lifts the power output to 1250bhp (from the standard 690 bhp). This means that 0-62mph is dealt with in a claimed 2.6secs, and top speed increases to 236 mph.

Inside you get premium leather on the seats and across the dashboard, as well as a pure carbon fibre steering wheel and anti-slip aluminium pedals. Just six will be produced.