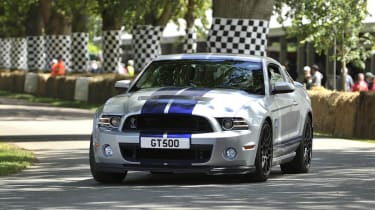 The Ford Shelby GT500 make its debut appearance outside the USA at the 2012 Goodwood Festival of Speed. This Mustang, the latest in a line of predecessors stretching back to 1964, has special significance, being a tribute to the late Carroll Shelby, the American, Le Man’s winning racer and automobile desginer, who passed away in May this year aged 89. This Mustang, taking its name from the 1967 Shelby GT500, has a 5.8-litre supercharged V8 which produces 662bhp, enough to see it past 200mph. Notable additions include a new quad-exhaust system and updated gearing, while it gets a unique set of alloy wheels. Carroll Shelby first collaborated with Ford in 1965 to create the Ford Shelby GT350. Its 298 cubic inch (4.9-litre) V8 engine it produced up to 360bhp in race spec. Shelby continued to work with Ford until 1970. In 2007, the Shelby name was revived for a special, Hertz-rental only Mustang GT-H, and has been used on Mustang GT500s since.