The SSC Ultimate Aero is reaching the end of its life, but the former top speed record holder is going out with a 1300bhp bang. 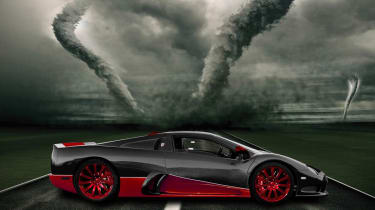 SSC North America has announced that production of the Ultimate Aero, formerly the world’s fastest production car, will soon be coming to an end. SSC is giving the model one final push before its final send-off, and it will see power turned up to 1300bhp in a new limited edition model named the Ultimate Aero XT.

Just five will be built, and a new model called the Tuatara will replace it. Much of the technology from the successor has been fitted to the XT to give it this monumental power figure, including the engine, paddle-shift gearbox, cooling and braking systems.

Shelby SuperCars Ultimate Aero was for a brief moment in history, the fastest production road car you could buy. With a top speed of 256mph, the Ultimate Aero took the record in September 2007, and held it until the Bugatti Veyron Super Sport hit a verified 267.86mph in July 2010.

Since then the record has remained Bugatti’s, but SSC North America (Formerly Shelby SuperCars) plans on once again taking the record with its 1300bhp XT.