'Friends of Carroll Shelby' have created a one-off 850bhp Mustang GT500 as a tribute to the legend - unveiled at the Rolex Monterey Motorsports Reunion. 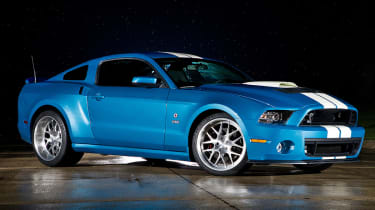 A one-off Shelby Mustang GT500, modified to produce 850bhp, has been unveiled at the Laguna Seca racing track during the Monterey Motorsports Reunion.

Ford Motor Company, Shelby American and Ford Racing built the GT500 – with help from many others – in honour of the 50th anniversary of the original Shelby Cobra. It’s also a tribute to the man who created the Cobra – the late Carroll Shelby.

The body is finished in Guardsman Blue with Wimbledon White stripes, the colour scheme of choice for many Cobra roadsters built in the 1960s.

Following its debut appearance at the Monterey Motorsports Reunion, this car will be taken on tour around the US, and ‘used in a special way at the end of its tour, a way Carroll would appreciate’.