evo's gallery from the most exclusive car show on the planet - the Pebble Beach Concours d'Elegance. 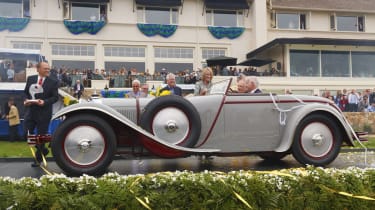 This year, the 'Best in Show' prize was awarded to a Mercedes-Benz 680S Saoutchik Torpedo. The 6.8-litre supercharged Mercedes-Benz was originally shown at the 1928 New York motor show, and is one of seven Jacques Saoutchik-designed 680S Torpedo bodies built.

A number of new cars were also unveiled at the show, including McLaren's exciting new X-1 prototype, and the SRT Viper GTS Launch Edition...