The seven-day Rally for Heroes event has successfully raised £122,000 for charity 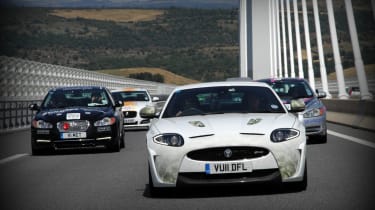 Founded by servicemen while serving in Afghanistan, determined to raise money for the both the Royal British Legion and Help for Heroes, Rally for Heroes has exceeded expectations – raising over £122,000.

The British charity event was founded back in 2010, with the simple goal of driving a total of five miles for every member of the British armed forces killed or injured in Afghanistan.

This year, starting from Dunsfold Aerodrome, each of the 58 cars was waved off by F1 commentating legend Murray Walker OBE. Heading into France via Dover, the convoy proceeded to the Thiepval War Memorial – the largest memorial to British Troops in the world. This was followed by a short memorial service and wreath being laid on behalf of each Service.

Continuing on South, the week long trip took in some of the great motoring locations as well as a number of memorial sites along the way. Le Mans, the Millau Viaduct and Monaco were first up, and then onto many of the best mountainous driving roads Europe has to offer, including the San Bernardino Pass, the infamous Stelvio and the Grossglockener Pass to name just a few.

Heading back North through Germany, the convoy visited Hockenheim and then onto the final destination of the trip, the Nurburgring.

The event’s founder, Corporal Mick Clark of the 1st Batallion, The Princess of Wales’s Royal Regiment, is already planning the next event for 2014, and is deep in the planning stages of what is set to be another amazing road trip. If you want to take part, offer sponsorship or help out in any way, visit www.rallyforheroes.com for full details.