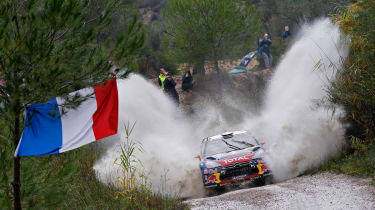 Sebastien Loeb ended his career as a full-time World Rally Championship driver with victory in Spain on Sunday.  Loeb - evo's Driver of 2012 in the current issue - led the field from the morning of day two.  He struggled during Friday’s wet and muddy gravel stages, but found his rhythm on Saturday’s asphalt tests. Frenchman Loeb sealed his 76th career victory in his Citroen DS3 WRC with a 7sec gap over Finnish Ford works driver Jari-Matti Latvala.  Loeb’s teammate Mikko Hirvonen rounded out the podium.  Day one leader Mads Ostberg slipped to fourth in his Adapta Ford. With only a partial campaign planned for next year while he prepares to potentially enter the World Touring Car Championship with Citroen in 2014, Loeb’s Spanish win effectively marks the end of his hugely successful career in the WRC. Loeb had already sealed his ninth successive championship victory in front of a home crowd on Rallye de France in October. Loeb leaves the WRC holding almost every record available.  He has scored the most event wins, stage wins, podiums, points and championships.  Uniquely, he has set all of those records whilst driving for the works Citroen team.  He also finished the 2006 Le Mans 24 hours in second place, on only his second attempt, driving for the Pescarolo team. So far, Loeb’s only confirmed rally in 2013 will be the Monte Carlo in January. Don’t bet against him adding to his statistics.