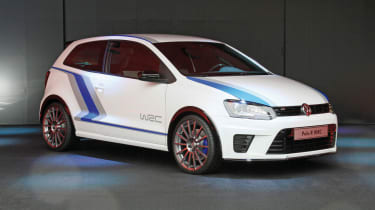 Volkswagen has revealed the most extreme version roadgoing version of the Polo ever, the 217bhp and 151mph R WRC Street. The car made an appearance along side the launch of the 2013 WRC car during a presentation in Monte Carlo.

To get more than 200bhp from the Polo, VW has dropped the GTI’s current 1.4 engine in favour of the larger 2.0-litre turbo engine straight from the Golf GTI. This results in a claimed 0-62mph time of 6.4secs and a top speed of 151mph.

VW claims that the model has been used to homologate various aspects of the actual WRC car. The new model is the realisation of the previous R-WRC concept that was unveiled earlier in the year at the Worthersee tuning show.

Externally, the R WRC gets a rear diffuser, roof spoiler and a lower front bumper. The motorsport-inspired 18-inch wheels wear 215/35 performance tyres, and the WRC influence continues inside, with a set of aluminium pedals, alcantara steering wheel and sports seats.

It won’t officially be sold in the UK, as the R WRC will be left-hand-drive only, although Volkswagen says customers can request an import via special dealer order – with the German price set at €33,900. Production will be limited to 2500 units, with deliveries expected in September 2013.