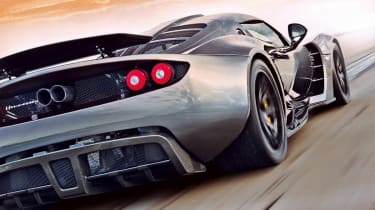 The March 2013 issue of evo signals a new, updated look for the magazine, with more space for features, a new regular feature - the Art of Speed - and an all new columnist. Full details below...

Buy a copy of evo 180 in our online shop

LettersMcLaren, Maserati and Aston Martin have riled you this month, while Harry’s ruffling feathers. Again

Hennessey VenomIt’s rated as one of the world’s fastest cars, but does this Lotus-alike hypercar deliver on its Top Trumps numbers?

The world’s best road?It could be high in the Brazilian hills, reckons Henry, after a raccoon-littered road trip in an Audi R8 Spyder

Dakar rally: rich and poorWe head to the 2013 Dakar rally and meet its various heroes, including the utterly inspiring Race2Recovery team Calsonic GT-RDickie gets behind the wheel of this Gran Turismo legend for real

Art of speedIn an all-new regular feature, iconic parts of fast cars go under the microscope. First up, Porsche’s ducktail Buy a copy of evo 180 in our online shop