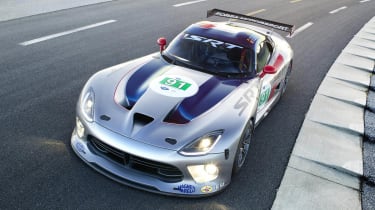 The Dodge Viper will return to Le Mans in 2013. The SRT Viper GTS-R will fight its battles in the LM GTE Pro class.

The endurance racing version of the new Viper supercar has been developed with Riley Technologies, an American racing constructor, with a far more aggressive look comprising new bumpers, rear wing and a heavily vented and sculptured bonnet. What lies beneath it remains to be seen; the road car uses a monstrous 640bhp 8.4-litre V10 unit, with its American Le Mans Series iteration limited to below 500bhp and 180mph.

The SRT Viper GTS-R will compete in potentially the most exciting class in the 2013 Le Mans 24-hour race, and certainly the most relative to road cars. Its key rivals will be pairs of Corvette C6s, Aston Martin V8 Vantages and Porsche 911 RSRs, as well as a trio of Ferrari 458 Italias, one of them with Giancarlo Fisichella among its drivers.

The Viper name is etched into Le Mans history, after the brutish American car strung together some impressive results in the late 1990s. SRT will be hoping the rather spectacular looking new car can repeat its success.