The Ferrari 458-based Pininfarina Sergio roadster is set to enter production. Details and specs here 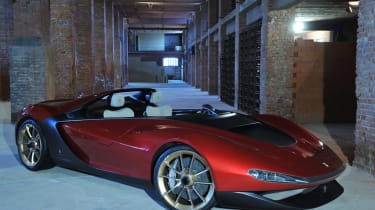 Remember that gorgeous Pininfarina Ferrari 458-based concept car from Geneva 2013? Called the Sergio – named after the company’s late founder Sergio Pininfarina – it's finally been put into limited production.

Under the skin the Sergio is pure 458, but Pininfarina has designed and engineered a new carbonfibre body. A major feature is its lack-of a conventional windscreen, however the car’s aerodynamics have been tweaked in such a way that the airflow over the car produces a ‘virtual windscreen’.

Being based on the 458, the engine is the same as the standard Spider, a 570bhp V8, but thanks to the 150kg weight-loss, performance is expected to improve slightly. Pininfarina claims a 0-62mph time of 3.4seconds with a top speed of 199mph.

The run of six units have already been sold to wealthy Ferrari enthusiasts from Europe, Asia and the United States who were approached by Ferrari, at an undisclosed price (although due to the car’s exclusivity it is presumably in the millions). Deliveries are expected in 2015.