The SRT Viper TA is a track focused version of the V10-engined supercar. Specs and pictures here 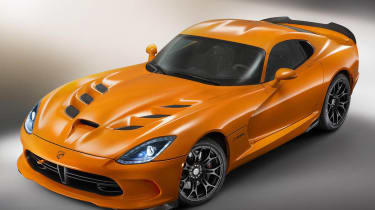 More details of the SRT Viper TA edition have been revealed by the American sports car maker. The acronym stands for Track Attack, and the limited-run model has been designed for the ‘performance enthusiast driver’ who likes to take their car on circuit, we’re told, though it’s road legal and still closely related to the standard Viper.

While initial releases on the car suggested just 33 would be made – all of them in the lurid orange paint you see here – SRT has now confirmed a much stockier 159-strong production run. That is split between TA Orange (93 cars), Venom Black (33 cars) and Bright White (33 cars).

The TA has 50/50 weight distribution, a lower centre of gravity than standard and the largest tyre contact patch of any production car in the world, apparently. The Bilstein DampTronic suspension setup gets tweaked spring rates as well as upgraded dampers and anti-roll bars. A structural cross brace in the engine compartment is made of carbonfibre rather than aluminium, and contributes to a 50 per increase in torsional rigidity over standard.

The Brembo brakes get an upgrade too, and sit behind lightweight ‘Sidewinder II’ alloy wheels, which are wrapped in Pirelli P Zero Corsa tyres. Their exact size, which yields that headline contact patch, hasn’t been confirmed. The engine is the same 640bhp/600lb ft 8.4-litre V10 naturally aspirated monster found in the standard SRT Viper.

A visual makeover consists of a carbonfibre-crafted front splitter and rear spoiler, resulting in a claimed 700 per cent increase in downforce at 150mph. That suggests a below average performance from the base car as much as it does wild improvement for the TA. The bonnet lokos much more aggressive, with rows of extra cooling vents over standard. The interior gains a pair of carbon-shelled Sabelt racing seats, which can accommodate three- or six-point harnesses.

A 1538kg kerb weight represents a 20kg weight saving over standard. Expect a 0-60 time below 3.5sec and a top speed a whisker short of 200mph. Like its base car – and unlike just about every other car in the world currently capable of such performance – the Viper TA comes with a manual gearbox as standard. America’s love of the stick-shift increasingly puts the European market to shame; this is the only place you can still buy a BMW M5 with three pedals, don’t forget…

Production of the 159 cars is currently underway in Detroit, with US deliveries by the end of 2013. You'll have to be both brave and rich to import one into Europe - details here.