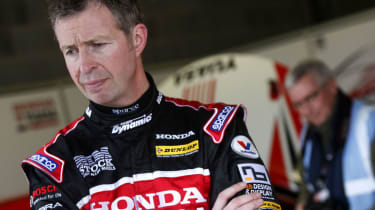 To count down to the start of the 2013 British Touring Cars season at Brands Hatch this weekend, evo caught up with five likely title contenders to get their thoughts ahead of a season set to be one of the most open in years. Today, we meet three-time BTCC champion and Honda Yuasa Racing Civic driver Matt Neal: How would you sum up your last 12 months?"It’s been fantastic for us. We won the teams’ title, and I was almost there on the drivers front, but it’s great for Flash [Gordon Shedden] to win it." You broke your hand last September. Has it fully healed?“It’s a lot better than it was, but it’s still not right. I’ve had to do a lot of physio on it, and it turns out the damage to it was a lot worse than I thought at the time.” What do you think are the biggest strengths of your Civic compared to the other cars on the grid?“Obviously there are some big differences this year with the range of turbo boost adjustments being reduced, but our biggest strength with our car is continuity. The car, the team and the drivers are all the same as last year, and we had a very strong package last year, so we’re just trying to round off any rough edges we had.” There’s potentially a capacity grid of 32 cars out there this year. How will the bigger field affect things?“It’s not going to be easy, especially in qualifying on the shorter circuits, and I think we’ll see a few red faces where some drivers have baulked others and a few cross words. It’s going to be the same for everybody, though, so we’ve just got to get on with it.” Which other driver in the field do you respect the most, and why?“The person I enjoy driving against the most is definitely Flash. He’s been talking about winning more championships, but when I was his age [34] I’d only won one BTCC race! He’s already Scotland’s most successful BTCC driver and he’s got one title under his belt now, so it’s phenomenal to think what he could still go on to achieve.” Who do you think will win this year’s championship, and why?“Me, because I will look after the new soft tyres better and I’ll do the best job of staying out of trouble. I never thought I’d win one title, so to be here in a great car with a real chance of equalling Andy Rouse’s record of four means I’ve got to give it everything. The fire still burns brightly inside me to do it.”