Alpine No36 fastest in ELMS testing 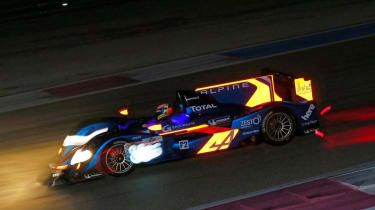 Nelson Panciatici recorded a lap time of 1m47.652s on Wednesday March 27, the second day of the test session. The Signatech-Alpine, making its track debut only a week after its unveiling, was roughly 0.4sec faster than the second quickest lap set by Frank Mailleux in the Morand Racing Morgan-Judd.

“We made good progress with Michelin. I did a number of runs with different options and I believe we succeeded in collecting some useful information,” Panciatici said after the test session.

The session was used by the team to evaluate changes made to the chassis, optimise set-up on the latest Michelin-supplied tires and to get the team’s three drivers some seat time. Panciatici completed 160 laps, Pierre Ragues 141 laps and Tristan Gommendy 115 laps.

Team Principal Philippe Sinault seemed content with the results of the test session: “I am pleased with the work we were able to get in.” He also added, “It’s all looking good for the beginning of the season.”

Signatech-Alpine will hope to keep up the good work when it takes to the track for the opening round of the 2013 ELMS (European Le Mans Series) at Silverstone on April 13.